The policy for providing grants to former municipal employees enlisted overseas had been changed in March 1916. The policy for grants to soldiers had been to provide the difference in pay between the former employee’s regular salary and their military pay, up to $1000 per year, provided they had worked for the City for at least one year before enlisting. Under the new rules, married men would receive a one-time grant of $100 and single men a one-time grant of $50, all in all much more affordable for the City.

City employee A.H. Finlison here is requesting his grant for military service. It will be given to him later in the month.

Port Arthur City Council brings forward a suggestion made by the Indian Agent, Russell Brown, that clothing no longer in use by the 94th and 96th battalion might be provided to “destitute Indians” in the District. This issue will be discussed again later in 1916.

Military grants are made to city employees A.E. Baker and A.H. Finlison. Baker had enlisted in service before the policy had changed, so he will receive a total of $300 to account for the change in his eligibility. Finlinson receives the standard grant, as he had enlisted and requested the grant more recently.

Fort William, like Port Arthur, regularly provided services to military offices, including free telephone and electric light service. Here, Fort William is asked to provide telephone service to the recruiting office for the 141st Battalion, and to the Patriotic Society Office.

In April 1916 the management of the Canadian Car & Foundry Company had suggested dismantling their Fort William plant and selling some of the equipment to the Russian Government.  This suggestion was emphatically denied by Fort William City Council, which strongly preferred seeing the plant completed and used to manufacture munitions or other material for the war effort.

Here, the Company requests that Council reconsider their decision – and offers to ensure that the plant will eventually operate a later date. Council still opposes the plan.

Fort William has also found that it has needed to change its military grant policies, especially as the war has continued for nearly two years. Now, only men who were City employees before the war began would be eligible for the military service grant.

City Council argues for the appropriateness of Fort William as a site for training and housing many troops to the west: both the City’s natural features, and its need for security in the event of an attack, are cited. Note here that the United States had not yet entered the war, and was at this time still a neutral country, and also the use of the term “concentration camp” refers not to what we know it as today, but as a camp for large numbers of the troops awaiting transportation toward the front.

“Moved by Aldermen Hardy & Piper: That this Board is of the opinion that owing to our strategical and isolated location at the Head of Lake Superior, that we occupy a very vulnerable position in the event of a well organized raid from southern shores.

“That owing to the concentration of all three transcontinental railways, elevators, coal docks, power plants, ship yards, munition plants, etc., at this point we occupy a particularly vulnerable position.

“That great economy would be effected in the transportation of Western troops, by concentration in this District. All Western troops could be forwarded in direct line to England or eastern camps.

“That the plains back of Fort William offer all the advantages necessary for a concentration camp, close to all three railroads, and with all advantages for strategic manoeuvring of large bodies of troops, training and scouting, over all conditions of country, plains, ravines, mountains, bush, lakes, rivers, etc., and offering exceptional advantages for such purposes.

“The site could be located on gravelly or sandy soil; with easy access for all utilities, water, light and telephone.

“There is no part of western Canada where the troops can be kept under canvas during winter months. Fort William and Port Arthur are well equipped with various available buildings suitable for the winter concentration of troops.

“That Aldermen Duncan, Wells and the Mayor be appointed a Committee to meet a similar committee of the Board of Trade, with a view to investigating the whole situation, drawing up a memorial, and report back for final action.

“That a copy of this resolution be forwarded to the Board of Trade.”

More correspondence regarding Port Arthur Council providing a grant to the Patriotic Fund. The Secretary of the fund, John Manning, has written a letter in support of the grant. 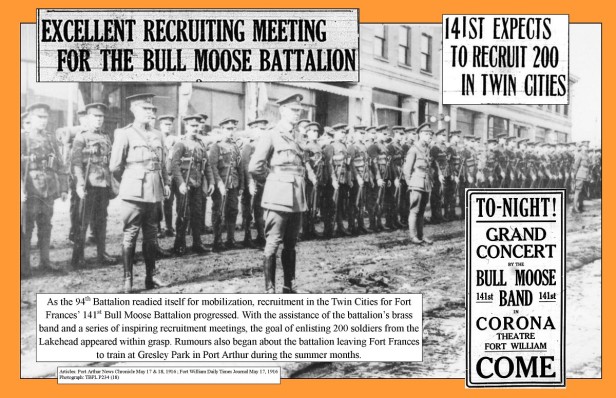 The Port Arthur Patriotic Association provides a further report of their expenditures and financial needs, in support of their request for a grant from Port Arthur Council. This report is also referred to the Finance Committee.

Douglas Stewart of the 94th Battalion has put in a request for the military grant of $100 for former municipal employees who have enlisted. However, the Utilities Commission has given Council some information that leads them to deny his request. It’s possible that he was not a city employee prior to the start of the war – which would make him ineligible for the request based on the policy change just this month. 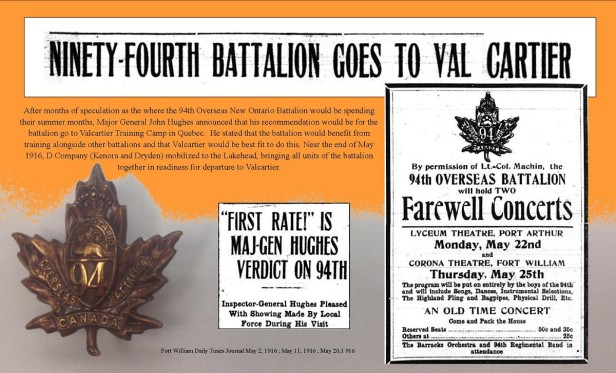 Alderman Sidney Wilson resigned on this date, May 29, as he would soon be departing for service overseas with the 94th Battalion. Wilson was a first-time Alderman in 1916, but would be elected again after the war in 1919 and 1920. He is given the military grant of $100 in recognition of his service to Council.

“That in accepting the resignation of Alderman Wilson, we place on record our appreciation of the services which he has rendered to the City of Port Arthur. That the decided and open stand which he has taken on all matters coming before us has redounded to his credit and aroused in the Electorate confidence in his fairness and good judgment, and that we regret his loss and trust that after his term of honourable service at the Front he may be spared to again grace this Council Board.”

Here, Council is making a request of the armed forces to use City facilities, rather than vice versa. If local soldiers could be trained in town, at Gresley Park, it would reduce the impact on them and their families. The 52nd Battalion used Gresley Park as a training site, so Council requested that the 141st consider it as well.

Finally, the Finance Committee recommends that the grant be given to the Patriotic Fund, to support their work in the community. The requested grant was for $12,000, equivalent to over $200,000 in today’s money.