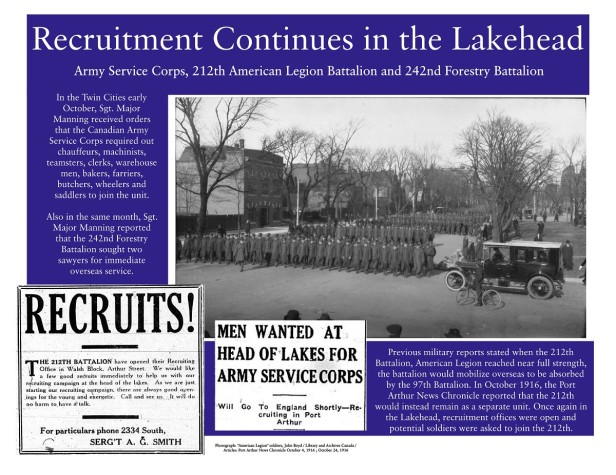 A committee is formed comprised of Alderman Blaquier, Slipper and Gibbon with the goal of securing quarters for a battalion to be stationed in Fort William during the winter months. A letter of assurance was to be sent to Col. Little indicating that provisions are being made for their accommodations.

More correspondence regarding plans for a battalion to be stationed in Port Arthur during the winter. During the last Council meeting a committee was formed with the goal of securing these quarters.

Port Arthur City Council received a letter from B.J. Roberts, Assistant Secretary of the British Red Cross regarding a Red Cross appeal. The letter was received and filed and the request will be revisited in November 1916.

Port Arthur City Council often provided phone and electric light services free of charge to military quarters. Here, Council has granted a request made by Sergeant S. Jacques of the 141st Battalion. Sergt. Jacques requested light and phone services for the battalion’s mess located at 309 Dufferin St. This mess hall would have been conveniently located a few blocks away from the Port Arthur armoury which is still located at 317 Park Avenue.

Note: There were no items related to the war effort in Fort William’s minutes for this month.