Prior to the start of the 1914 baseball season a group of Fort William businessmen purchased the St. Cloud, Minnesota Northern League franchise bringing professional baseball to the head of the lakes.  The Fort William Canadians, nicknamed the ‘Canucks’, played in the Northern League ‘C’ Division during the 1914 and 1915 seasons before disbanding due to the impact of WWI. This early league included teams from Duluth, Fargo-Moorhead, Grand Forks, St. Boniface, Superior, Virginia and Winnipeg.

Throughout the summers of 1915 – 1916, multiple cricket teams representing Fort William, Port Arthur and military units faced off in exciting cricket matches. The images below are linked to detailed accounts of those events. 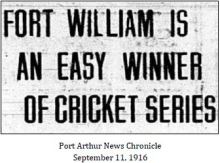 Although there was some pressure to encourage young men to pick up a Ross rifle instead of a hockey stick during the First World War, amateur hockey did continue in both Fort William and Port Arthur during the war years.  In fact some prominent hockey supporters argued that providing people the opportunity to watch sporting events was a good diversion.  Sporting matches eventually became ways to raise money for such patriotic causes as the Red Cross.

The 1915-16 season of the Thunder Bay Amateur Hockey League featured a team from Fort William and Port Arthur and a team made up of members of the 94th Overseas Battalion.  The Fort William Senior Hockey team won the league title and travelled west to challenge the Winnipeg 61st Battalion for the Allan Cup, emblematic of the Canadian Senior Hockey title.   The 61st Battalion won the first game 4 to 1 and Fort William won the second game 5-4, leading the Winnipeg 61st Battalion to win the 2-game, total goal series 8-6. Winnipeg defeated their next challengers, the Regina Victorias to be named the 1915-16 Allan Cup champions

The members of the 1915-16 Fort William Hockey Club included:

The 141st Battalion senior hockey team claimed the 1916-17 Thunder Bay Amateur Hockey League title by defeating teams from Fort William and Port Arthur. At that time in Canadian senior hockey history, the Allan Cup was played for in a challenge series, with the team that won the Allan Cup in the previous year retaining it until the next season when they would accept challenges from other teams.  The 1915-16 Allan Cup had been won by the 61st Winnipeg Battalion who, by the time the 1916-17 season came around, had been sent overseas.  As a result the Winnipeg Victorias, the champions of the Winnipeg Patriotic League that season, took over the Allan Cup and welcomed a series of challenges.

Retaining the Allan Cup by making it through their first two challenges by defeating teams from the Winnipeg & District League and the Winnipeg Military League, their third challenge came from the Thunder Bay Senior League champions, the 141st Battalion.  Held in Winnipeg, the Victorias won the first game 5-1 and the second 5-4 to win the 2-game, total point series 10 to 6. Unsuccessful in their final challenge series, the Toronto Dentals of the Ontario Hockey Association were named the 1916-17 Allan Cup champions.

The members of the 141st Battalion 1916-17 Senior Hockey Team included:

A full account of the 1917 Allan Cup championship has been researched and written by Jake Alfieri, based on accounts and information published in local newspapers at the time.

The Times-Journal 10 Mile Road Race was a popular race that was traditionally held each Victoria Day, starting in 1910.  The race began and ended in front of the Daily Times-Journal offices on May Street and wound its way through the streets of Fort William and Port Arthur.  The Daily Times Journal held the race from 1910-1914 and 1920-1939, cancelling it from 1915-1919 due to World War I.  This photo features the officials who oversaw the 1914 race, the last one held until the race resumed again in 1920. 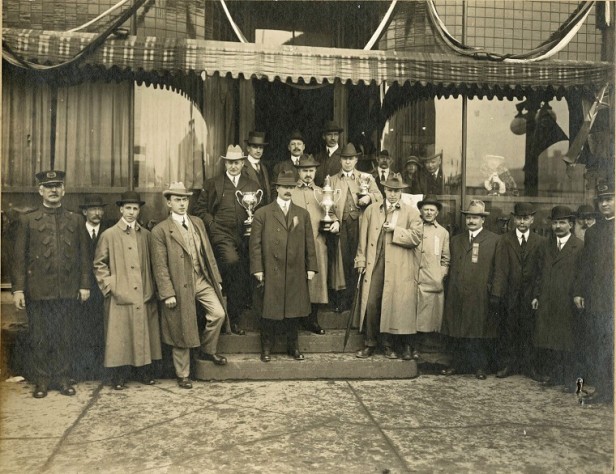