Lieutenant-Colonel John James Carrick is a Thunder Bay legend and one of the most interesting and intriguing people ever to reside in the Lakehead. The former Port Arthur Mayor, Member of Provincial Parliament and Member of Federal Parliament once stated that he initiated the idea of the Prince Arthur Hotel during a poker game with Sir William MacKenzie, President of the Northern Railway. He was also responsible for developing property such as Mariday Park, Carrick Park, Highland Park and Victoria Park and once sold Mariday Park property to famous explorer Sir Ernest Shackleton.

Real estate mogul, newspaper owner, author, politician and expert self promoter are all words associated with John James Carrick. However, one other term associated with the man is military officer. 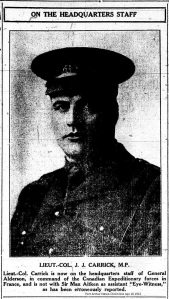 In 1914, during the early months of the war while overseas in England, J.J. Carrick met with French and British officials in hopes of obtaining a contract for the Port Arthur Wagon Works Company. Also in 1914, the Fort William Daily Times Journal reported that Carrick was to be made an honorary Colonel of the 96th Lake Superior Regiment and in January of 1915, Lieutenant Colonel Carrick left for active service in Europe. While overseas Lieutenant Colonel Carrick was stationed in France to the Canadian Expeditionary Forces Headquarters Staff and began cabling news back to the citizens of the Twin Cities telling of the war. In September of 1915, Colonel Carrick returned to the Lakehead on temporary leave and consented to a public speaking engagement at Port Arthur’s Lake City Rink concerning the Canadians at the battle front.

Lieutenant Colonel Carrick again returned to Port Arthur in October 1916 and the Port Arthur News Chronicle (which Carrick owned at the time) published an interview which detailed Colonel Carrick’s thoughts and observations concerning the war.

The above image can be enlarged to be read in three parts Part 1, Part 2, Part 3.

When the war ended, J.J. Carrick moved to Toronto and then later to Mexico where he resided until he passed away in 1966.