A field kitchen was a mobile kitchen or canteen used to transport warm meals to military personnel serving near the frontline or in temporary encampments during the First World War. Discussions in the Lakehead surrounding the purchase of field kitchens began in May of 1915, with a request to Fort William’s Mayor Young from Captain J.C. Milne of the 28th Battalion.

Initially, Port Arthur and Fort William jointly purchased a smaller field kitchen for members of the 28th Battalion in May 1915 at the cost of $450. However, when discussions of a field kitchen for the 52nd Battalion began, a larger, four-wheeled kitchen was recommended by the manufacturer, as it was the only style of field kitchen permitted at the frontline.

After months of discussion between the cities of Port Arthur and Fort William, a four-wheeled field kitchen was presented to Lieutenant-Colonel A.W. Hay of the 52nd Battalion in November 1915. The field kitchen was purchased from the McClary Manufacturing Company out of London, Ontario, at a cost of $1,200 dollars (equivalent to approximately $25,000 in present day). Fort William and Port Arthur split the purchase cost with each city paying $600.

According to the McClary Manufacturing Company’s detailed description (see below), the field kitchen had the capacity to hold 880 pints of liquid, soup or vegetables; 150 lbs. of roast meats; 25 gallons of hot water; and 50 lbs. of raw meat. As well, the kitchen contained extra capacity to hold 2 bushels of raw food storage in emergency bins. A full list of the field kitchen’s specifications can be viewed below (click on each image to enlarge). 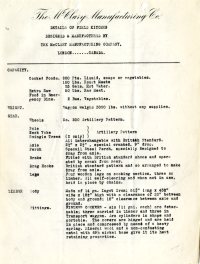