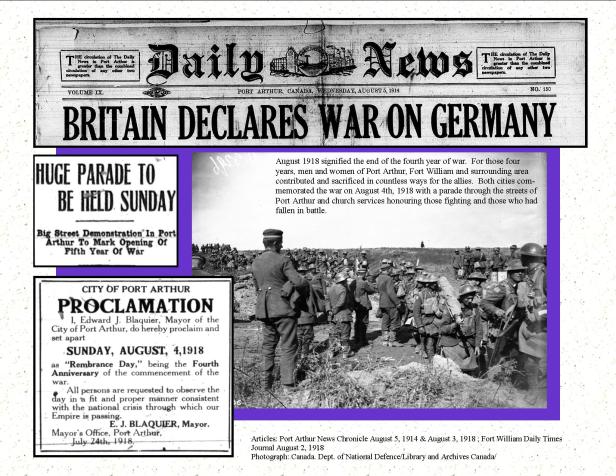 A telegram was received in Port Arthur from Col. Henderson informing the Council on the tour of His Royal Highness Prince Arthur of Connaught through Canada.

The Fort William city council discussed the transportation of the Military Police through the city.

The Military Police had its beginnings in January 1918 where it started as a temporary enlargement of the Dominion Police. The group was then transferred to the Department of Militia and Defence in June of that same year and became the Canadian Military Police Corps.

A letter from the City Clerk of Saskatoon was sent to Port Arthur Council concerning the defects of men examined under the Military Service Act.

The Military Service Act created conscription in Canada. The act was brought to parliament by Sir Robert Borden and was became law in 1917.

A. Fit for general service at home and abroad

B. Unfit for general service abroad but fit for base or garrison service at home and abroad

C. Fit for home service only

Category “E” was discussed in Port Arthur’s resolution. The Council felt it is necessary not only to conserve human life but also to maintain health and human efficiency and prevent sickness by proper public health, education, and provide medical treatment when possible.

The Council resolved that the Dominion and Provincial Governments be requested to use the information on record regarding persons medically examined and rejected by the military be used so that they will receive proper medical advice and treatment.

The Navy League of Canada was formed in 1895 to aid the Royal Navy and ensure proper naval defence. During the First World War, the league recruited for the Navy and Merchant Marines, provided financial assistance to families of naval personnel, operated hostels for the Navy, and provided rehabilitation for Naval Veterans.

Like Port Arthur; Fort William also received a letter from the City Clerk of Saskatoon, enclosing copy of motion, in connection with treatment of those physically defective under the Military Service Act.