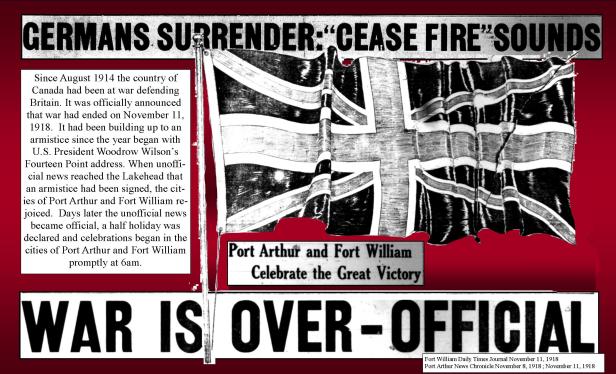 In October, we saw that Port Arthur Council was considering not changing the clocks back at the end of the government enforced Daylight Saving, but here they received a letter from J.F. Paige, General Manager of the Port Arthur Shipbuilding Company asking to set the clocks back one hour to “revert to Solar time”. Unfortunately, the motion lost.

There was an “extreme shortage of pig iron and basic metals” for the iron and steel industries to use.  Vice-Chairman Jones of the War Trade Board had assured a meeting of the Dominion War Trade Board that everything possible was being done to get a number of blast furnaces in Ontario running again that had been “out of commission for some considerable time.” He had assured the iron users that one of the furnaces to be re-opened was the Port Arthur Furnace.  The Port Arthur City Council wanted to make the Chairman aware that they also had to plan for the future and not just reopen the blast furnaces for the immediate need.  They wanted to point out to the Dominion Parliament “that the future of this section depends largely on the development of its mineral industry, owing to our immense mineral deposits, and the City of Port Arthur has shown its interest by investing a quarter of a million dollars in the Atikokan Iron Blast Furnace and iron deposits.” This would be more than $3.6 million in today’s Canadian dollar.

Mr. G. W Gorman, President of the Great War Veterans Association together with a special Committee appointed to deal with the fuel situation in regard to families of soldiers overseas presented a petition to Fort William City Council asking for a special grant of $4,200 for the purpose of purchasing fuel for these families.  The Mayor and Finance Committee were going to ask the Patriotic Society to see if they had any funds set aside for this purpose.

Since the end of the war had been declared on November 11, both City Councils took the opportunity at their meetings the next day to congratulate the leaders on the victory.  Here Fort William sends their “hearty congratulationsto David Lloyd-George, Premier of Great Britain in the victory which has crowned the efforts of the empire in the terrible struggle for liberty and civilization.”  They go on to congratulate him on his “commanding ability”, thank the military and naval commanders and their men for their service, and thank His Magesty King George.

Port Arthur City Council received another letter in support of reverting to the regular time or “solar time”.

At the end of October, Port Arthur City Council had asked the cemeteries in the City to consider setting aside space for a Military Cemetery, which they have discussed and agreed to do.  Here, the Council endorsed the proposed scheme and sent letters asking, Mr. P. H. Keefer, Major Black, Military District No. 10, and the Minister of Militia and Defence for assistance establishing the proposed cemetery.  They also sent a copy of the resolution to the Great War Veterans Association and the Army and Navy League to let them know that they were in favour of the scheme. 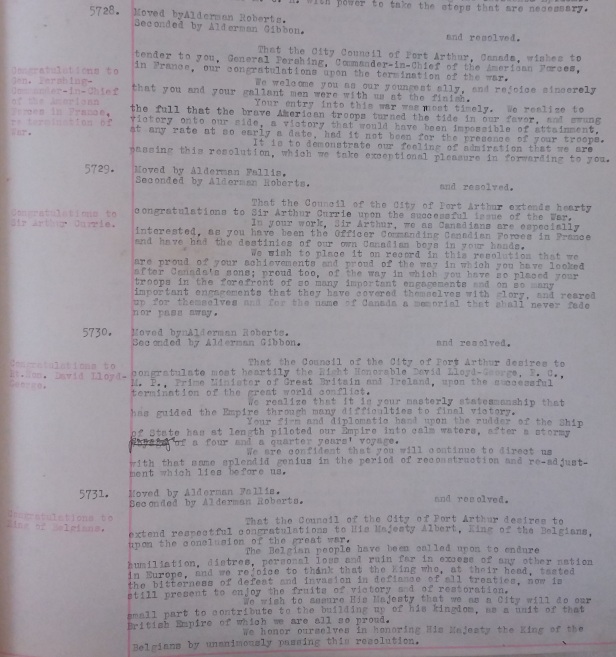 In celebration of the ending of the war, Port Arthur City Council passed a number of resolutions of congratulations to various military leaders within the Allied forces including:

The Port Arthur Council extended its condolences to the family of Alderman W.A. Wright. He was the owner of Wright Furniture Co., and a Port Arthur Alderman in 1917 and 1918, where he took on “the additional duties of Local Fuel Controller with its mass of detail and has brought order out of chaos and saved our City from a fuel famine during the coming winter.  […]  In his death, the City loses a valuable citizen, an excellent Counsellor and one of her most progressive business-men.  We again desire to extend to Mrs. Wright and family our sincere sympathy in their irreparable loss.”  W. A. Wright died of the Spanish Flu on November 19, 1918.