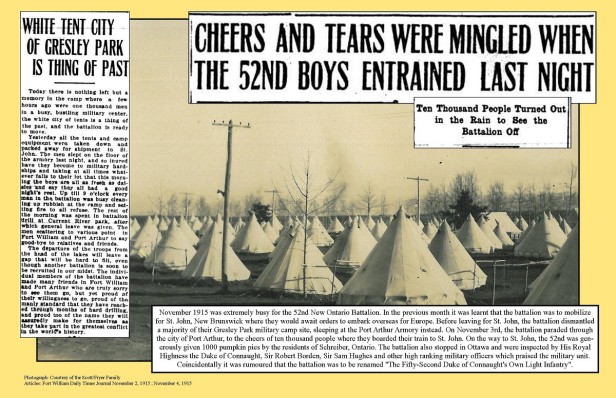 In November 1915, the Council minutes reflect a major emphasis on funding the war effort, both through direct municipal contributions to military functions, and through supporting community fundraising. Further, we begin to see discussion of suffrage for the wives of men fighting overseas, and concerns about the treatment of returned veterans.

Port Arthur Council agrees to supply light and telephone to the Red Cross, free of charge. This was a common way for the municipality to support local war efforts, as the benefit to the organization receiving free services was greater than the loss to municipal public utilities revenue.

The Red Cross offices were located in the Ruttan Building, on Court Street. It was constructed in 1909 and is still in use today.

In time for winter, heaters were installed at the training camp at Gresley Park, with the additional cost of electricity to be paid for by the City of Port Arthur.

A letter received discussing a difference between regular pay and war pay for a firefighter. This is referred to the Finance Committee, and the issue is not raised in Council again. 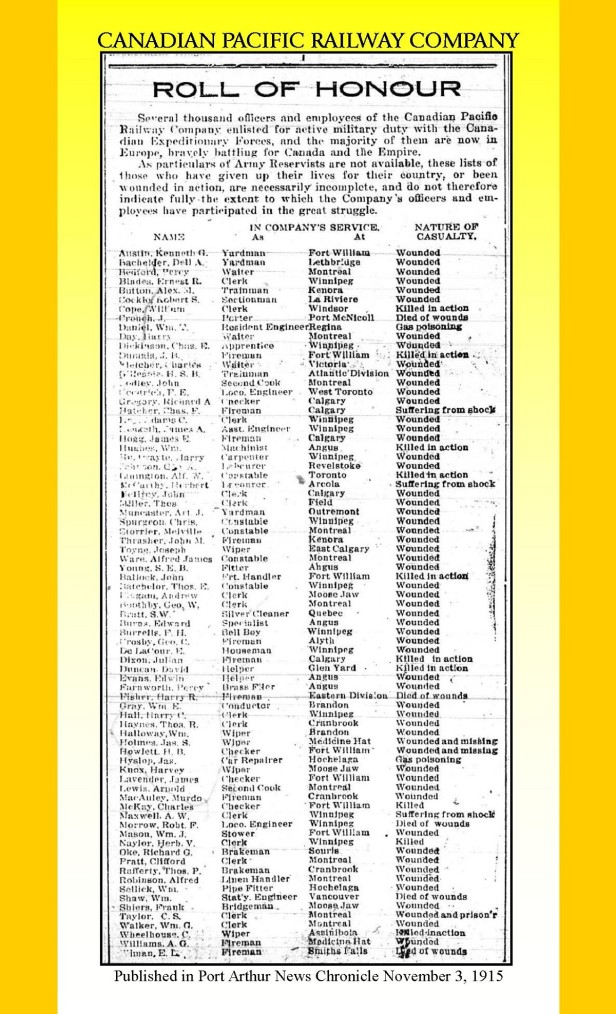 A letter is sent to Lieutenant Colonel Hay of the 52nd Battalion, regarding the donation of the Field Kitchen. His letter of thanks to Fort William and Port Arthur can be seen below.

Arrangements are being made for quartering a new Battalion in the Armoury. This is the 94th Battalion, which would be authorized in December 1915, and would recruit in Northwestern Ontario. There will be quite a lot of activity in coming months around the authorization and mobilization of the 94th Battalion.

Correspondence between J.J. Carrick, still the MP for Thunder Bay and Rainy River while on military duties, and Port Arthur Mayor James Mooney, related to the munitions contract.

Fort William City Council had discussed in October 1915  the goal of raising $2000 in the City for the British Red Cross (over $40,000 in today’s dollars.) Council here has decided to donate up to $500 from municipal funds, to make sure that fundraising goal is met. This Council meeting ended early so that a fundraising concert could take place at City Hall.

The next Council meeting reconvened a few days later. Mayor Young presented the results of the British Red Cross campaign, showing that $2086.52 had been raised by citizens. Mayor Young was not often present at Council meetings by this time, because of his responsibilities with the 96th Battalion. Immediately following that report, Council agreed to provide an additional $500 to the British Red Cross campaign, raising the total to over $50,000 in today’s money.

The Mayor reports that the Federal government, which was responsible for the internment of enemy aliens, had refused to give relief to any families other than the interned prisoners. The report shows that most interned prisoners were single men, and that 700-800 people were relying on the municipality for relief. The City Council clearly states that they do not believe the municipality should be responsible for supporting these people:

“That in the opinion of this Council the care of alien enemies who are destitute is clearly the duty of the Government, and if the instructions of Major-General Otter under date of Nov 4th, addressed to Mr. A.L. McEwen are carried into effect and it becomes necessary for the City of Fort William to give relief to alien enemies in Fort William, that a proper accounting be made of the Relief given to alien enemies and that an account be sent to the Department of Justice at Ottawa and payment requested.”

A letter is received from Lieutenant Colonel Hay of the 52nd Battalion, regarding the donation of the Field Kitchen. His letter of thanks to Fort William and Port Arthur can be seen below.

Lieutenant Colonel Machin of the 94th Overseas Battalion thanks Port Arthur City Council for their provision of additional telephone service at the Armouries.

A letter of thanks received from Lieut. Colonel Hay of the 52nd Battalion, thanking Port Arthur for its gift of the Field Kitchen. (See also October 1915). Hay sent a similar letter of thanks to Fort William, which is posted in its entirety below.

Port Arthur City Council agreed in August 1915 to provide and pay for telephone services at Gresley Park, the training camp for the 52nd Battalion. Here, Council has received the bill for services from the Public Utilities Commission, and will take care of the account.

The question of suffrage – voting rights for women – now comes before Port Arthur City Council. The West Algoma Equal Suffrage Association has written to Council requesting their support for a policy where wives of enlisted men would temporarily inherit their husbands’ voting rights. Council supports this concept in principle:

“… that this Council is in full accord with the principle laid down by the Association, “That the wives of men who are at the front represent their husbands in all civic affairs,” but that the matter is one that does not come within the jurisdiction of this Council and that the application should be made to the Provincial Legislature.”

The Suffrage movement had been active in Canada since the end of the nineteenth century, and voting rights for wives, widows, mothers, or sisters of soldiers enacted in the Wartime Elections Act of 1917 would be a major step towards women’s legal equality.

A letter received from the Secretary of the Military Hospitals Commission, Ernest H. Scammell. The Military Hospitals Commission had been formed in June 1915 and was responsible for hospitals and convalescent homes for returning soldiers in Canada. While the exact contents of this letter are not known, the treatment of veterans would be a pressing issue for cities across Canada as the war went on.

“That this Council desiring to facilitate the mobilization of the 94th Battalion in this City, would beg to advise Lieutenant Colonel Machin, Officer Commanding, that this Council stands ready to do what is in its power to advance the comfort and organization of this Corps to full strength.”

Port Arthur made the promise to enlisted former employees in August 1915 to pay the difference between their military pay and what their City salaries would have been. Fort William, on the other hand, had decided to pay lump sums to employees on their enlistment. Here, the City Clerk, T.F. Milne, is asked to investigate how much members of the Canadian Expeditionary Forces are paid, so that the City can determine the correct compensation for enlisted former employees. 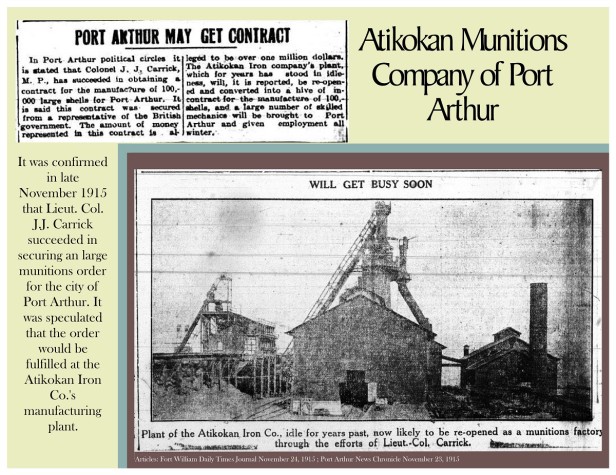 Four letters received and filed by Fort William City Council. All correspondence is related to wartime conditions – as can be seen on this site, more and more of the cities’ concerns deal with the war and its effects on citizens.

Councillors were invited to a fundraising dance in support of the Red Cross, to be held at the Orpheum Hall, 230 Cooke St, Port Arthur.

The Town Clerk of Kenora wrote to say Kenora would not be contributing towards the purchase of a field kitchen. It does not appear that the invitation to contribute was recorded in any other Council minutes.

A thanks to the citizens of Fort William for their generosity, from “non-commissioned officers and men of the invalid troop train.”

Last, the same letter as was sent to Port Arthur, from the West Algoma Equal Suffrage Association, requesting support for voting rights for wives of enlisted men. Fort William did not act on this letter.

The Daily Times-Journal, the major Fort William daily paper from 1899 to 1972, began raising money for a Christmas Cheer fund for the Royal Navy. Their letter asks Fort William City Council to endorse this campaign, which it does happily.

A letter is received from the 52nd Battalion, thanking Fort William Council for their part in donating a field kitchen. (See more about this donation in September 1915)

It gives me pleasure to announce the arrival of a four-wheeled field kitchen from the McClary Mfg. Co. [manufacturing company] This kitchen bears a plate on which is inscribed the following:

“Presented to 52nd Battalion by the Cities of Fort William and Port Arthur.”

I would be pleased if you if you would convey to the City of Fort William our thanks for their part in providing us with this magnificent gift.

With best wishes, I would remain,

Fort William’s City Treasurer is here asked to invest $100,000 of the City’s sinking fund into the Dominion War Loan. Canada began raising war loans in 1915; in 1917 a major Victory Loan campaign would take place across the nation. A sinking fund is a fund used to set aside money to pay for future capital expenses or to pay down debts; Fort William would expect this money back with a good rate of return in 1925, ten years later.