Lieut. Col. Machin, commanding officer of the 94th Battalion, writes a letter to Port Arthur City Council thanking them for their resolution regarding recruiting and organization of the 94th. The resolution referred to is Res. 2899, passed in November 1915. Lieut. Col. Machin will correspond regularly with the Councils of Port Arthur and Fort William as the 94th Battalion forms and trains – they will embark to Britain in June 1916.

Fort William Council considers what their city has to offer to newly raised troops:

“That whereas it has come to the notice of this Council that certain new battalions have been authorized and are being recruited in the west to be quartered at Winnipeg and whereas the accommodation of troops in that City are limited, and that any additional accommodation will require considerable expense to the Department of Militia for rental and the installation of expensive alterations to make them fit for military purposes, therefore we would again draw the attention of the Minister of Militia to the offer made by the City of Fort William dated Nov 2, 1915 offering the buildings of the Steel Company of Canada, free of rent, and the further concession of free water, light and telephone. This offer we believe will effect a saving to the Department of from $10,000 to $20,000 per annum, and at the same time give accommodation that is far superior to that afforded to the average battalion quartered outside of Government Drill Halls and Barracks, and that the City Clerk send a copy of this resolution to Sir Sam Hughes, Minister of Militia, asking for his earnest consideration of this offer, which we believe is made in the interests of the service of his Department and the country at large.”

Troops raised in this region had so far been quartered in Port Arthur, a point of pride for that City, and by this time Fort William would want to demonstrate their equal support for the war effort. 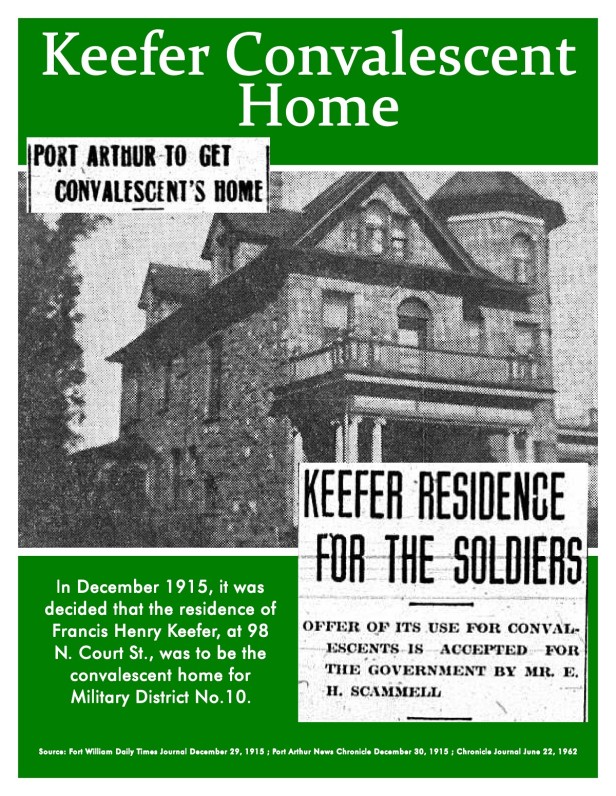 Here, Fort William City Council gives the regular military grant to a street railway employee, C. Bowles, who has joined the 52nd Battalion. Immediately after the grant is made, a policy is put in place that soldiers must have been in the employ of the City for at least 6 months before they become eligible for the grant – one can guess in this case that Mr. Bowles was only a City employee for a short time before enlisting.

Charles William Jarvis, MPP for Fort William (1911-1919) intends to help form a Soldiers’ Aid Committee to support returned soldiers. Fort William Council is in favour of this proposal, and a public meeting is planned. 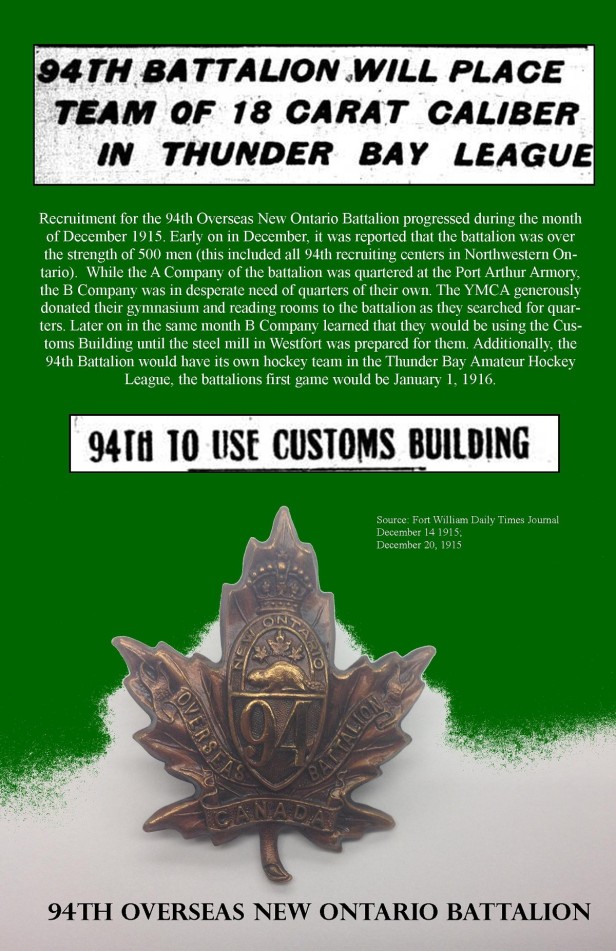 The 94th Battalion requests a donation of $500 for “military band purposes.” This request was made late in the year, and because the sum was considerable ($10,000 in today’s money), the decision is put off until the 1916 Council is in place. 1915’s Council recommends the donation provided a number of conditions can be met: that funds are also raised by Port Arthur and communities in the west of the District, that Fort William recruits will be quartered in Fort William, and that this donation will be in place of any other donations made to the regiment.  Fort William has been contributing to the war effort for a year and a half by this time, and funds are getting tighter as demands grow on both supporting the troops and providing relief to the dramatically growing number of homeless and unemployed.

Here Lieut. Col. Machin formally requests that telephone service be installed in the Officers’ Quarters of the 94th Battalion. Council agrees to provide and pay for that service.

Port Arthur Council receives a request for pay for enlisted former employee F.C. Guy, and grants that request. Rather than a standard grant, Port Arthur had opted to provide the difference in pay between the former employee’s regular salary and their military pay, up to $1000 per year, provided they had worked for the City for at least one year before enlisting. The Resolution 2752 referred to here was passed in August 1915.

The Public Utilities Commission, which was newly formed near the end of 1914, and whose employees would have been formerly considered City employees, was concerned with the same issue at this time.

The Chief of Police, W.J. Dodds, informed Fort William City Council that eight members of the Police Department have enlisted for overseas service, and asked that they be eligible for the employee military grant as well. Council agrees – the grant is given to each of those former police officers, and other police officers will be eligible for grants in future. The grants will fall under the police department’s budget.

A letter received from Lieutenant Colonel Machin of the 94th Battalion, regarding the possibility of housing troops in Fort William. He asks if the City will take action towards fitting the Steel Company of Canada buildings on Montreal Street to conditions appropriate to quartering troops. An agreement regarding these buildings had been made in October 1915.  Council replies that the City is willing to have the building wired for lighting, and connect sewer and water, at a cost of not more than $200.

Lieutenant Colonel Machin, of the 94th Battalion, requested support from Port Arthur City Council to provide telephone service in the Paymaster’s Office at the Armoury. Council agrees to provide telephone free of charge, as they have been doing for most other military offices.

At the end of the year, with new elections to be held January 3, 1916, Port Arthur’s Mayor James Patrick Mooney elected to retire. Here, Councillors express their thanks for his services during a difficult time, and decide to present him with an honorarium of $1000 (a little under $21,000 in today’s money, which is a tidy sum, but lower than a city councillor is paid these days.

Mayors and Councillors were not paid a salary, but would be reimbursed for their expenses on City business. At this time, Mayor would not have been considered a full-time position, despite requiring travel and many hours of work, and those who held office would have continued in other careers at the same time.

There would be considerable turnover on both Councils from 1915 to 1916. Fort William’s Mayor Samuel Crawford Young had been absent for much of the year for military service, and the new Mayor, Harry Murphy, had stood in as Acting Mayor many times before. Port Arthur’s Mayor Mooney opted to retire, and was replaced by lawyer and 3-time councillor Donald James Cowan.

Only four of Port Arthur’s ten City Councillors would return in 1916, and many of the replacements were entirely new to City government. In Fort William, seven of twelve councillors returned.

The turnover represented a level of citizen dissatisfaction with how the two Cities were being run. Wartime leads to austerity, and it was difficult to provide the same services and benefits as during better times, while also supporting the war effort. 1915 was a contentious year, with disagreements in both Councils over services and staffing.