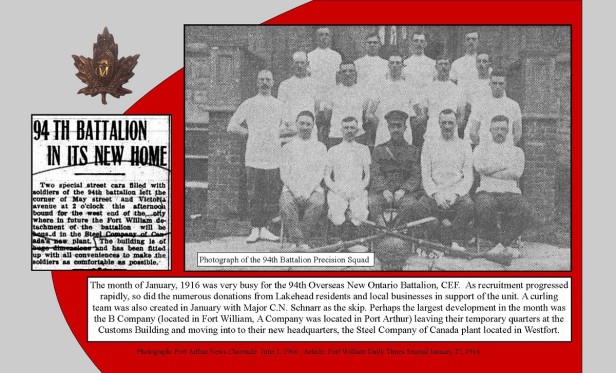 The new year begins with addresses to each City Council by their Mayor. Mayor Murphy of Fort William referenced the war in his inaugural address:

“The greatest war this world has ever seen is still unfinished, but we should have no fear of the result, though the consequent strain is being felt throughout the world, and we as a community can best stand this strain by each citizen husbanding his resources and minimizing his expenditure…”

Mayor Cowan’s address to the new Port Arthur City Council was not recorded.

The military grant, provided to municipal employees who have listed, is requested by B. McCormack. Council agrees that the usual amount of $50.00 should be paid.

The Returned Soldiers’ Aid Society, formed just a month ago, has asked Fort William City Council to appoint a member as representative to the society. Mayor Murphy was appointed.

A letter is received from the Treasurer’s Department of Ontario, regarding provincial War Tax. This is not the famous War Tax Upon Income, which is still paid today as Income Tax. The correspondence was referred to the Finance Committee.

The Walsh Block, at the corner of Arthur Street (now Red River Road) and St Paul Street, in Port Arthur, caught fire on the morning of January 14, 1916. Here, shortly after that fire was put out, Council expresses their thanks to the Fire Chief and Fire Brigade, and also to officers and members of the 94thBattalion who helped in the firefighting efforts.

“That this Council desire to put on record, and to convey to Officers and members of the 94th Battalion, the appreciation of this Council for the excellent aid so generously rendered to our Fire Brigade in fighting the fire in the Walsh Block, this morning. In a temperature considerably below zero and in a cutting wind, which made the work dangerous and very uncomfortable, these voluntary helpers did not weaken but assisted throughout the duration of the fire and the thanks of the Community are due to them, and this Council hereby instructs the Clerk to convey the same to Lieut. Col. Machin.”

Colonel S.C. Young, Mayor of Fort William until the end of 1915, has sent reports on his visits to Toronto, Ottawa, and other cities to discuss industrial development in Fort William, particularly related to the manufacture of war munitions and the Board of Grain Commissioners.

Council discusses the program of military grants – providing funds to City employees who have enlisted for active service. Regular readers will have noticed just how often these grants come up in Council meetings of both Port Arthur and Fort William: since the process for approving grants is so straightforward, it does make sense to have them approved by the Finance Committee rather than by Council.

The letter regarding band instruments for the 94th Battalion is referred to the Finance Committee. The same request is also discussed by Fort William City Council later in the month.

Here, Port Arthur City Council is dealing with issues around municipal funding for the war. Fort William had recently authorized $100,000 of a sinking fund to be paid to the Dominion War Loan. Port Arthur is more sceptical, and is requesting that the Provincial Government change its legislation so that a debt will be paid back over twenty rather than ten years.

Similar to the letter received by Port Arthur City Council, above, Fort William was asked by Lieut. Col. Machin to provide funds for a band for the 94thBattalion. The request was first made in December 1915 and Council then did not make a decision, but recommended certain conditions: that funds would also be raised by Port Arthur and communities in the west of the District, that Fort William recruits would be quartered in Fort William, and that this donation would be in place of any other donations made to the regiment.

Under those conditions, the new 1916 Council approves a grant of $500 for the band.

Correspondence had been ongoing this month regarding the Provincial War Tax. Here, Council agrees to pay a fairly large sum, $16262.50, which is considered due to the Province. Nowadays, of course, municipal tax revenue is not paid to the province, and instead municipalities are more likely to receive funding from higher levels of government – the wartime conditions created a very different economic environment than we are used to today.

More on this issue appeared in the February 12, 1916, issue of the Fort William Daily Times-Journal: 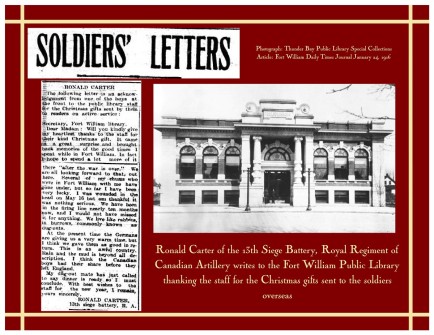