July 26, 1936 was a truly important day for Canadians as His Majesty, King Edward VIII unveiled the Canadian National Vimy Memorial in France. This memorial honoured Canada’s contributions to the Great War and the country’s fallen soldiers. Over 100,000 people were on hand to witness the ceremony, including more than 6000 Canadian veterans and their family members who traveled overseas for the event. 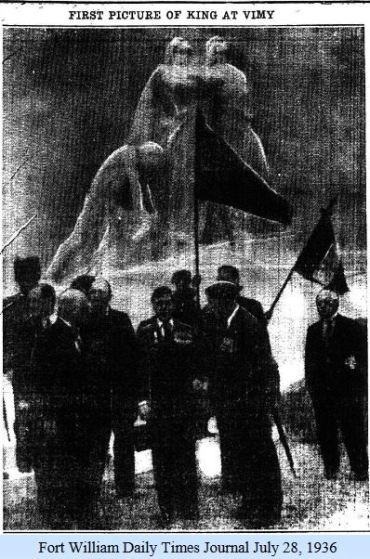 In 1934 the Canadian Legion announced that a pilgrimage overseas for ex-servicemen and women of Canada was being organized. Veterans across Canada wholeheartedly supported this event, including the Canadian Legions of Fort William and Port Arthur. Two years of careful planning and preparation took place and in July 1936 the pilgrimage began.

Five ships were designated to take the travelers from Montreal across the Atlantic Ocean to Europe. These ships were escorted by the H.M.C.C. Saguenay on their way to France. Many other Canadians who could not secure passage on the five pilgrimage steamers were not thwarted in their quest to join the ceremony and embarked on regulars ships overseas. 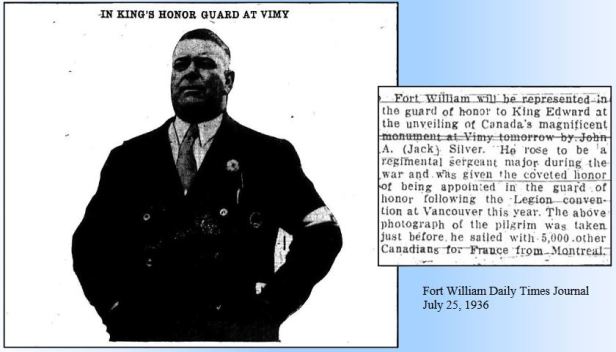 On July 27, 1936 King Edward VIII unveiled the monument to a crowd of over 100,000. The monument itself took eleven years to build and was designed by Walter Seymour, a Canadian. The inscription on the monument reads:

11,285 names were also carved out onto the monument’s walls. These names were of Canadian soldiers were died fighting in France but it was not known where their final resting places were.

As the ceremony was taking place in France, the Twin Cities held their own memorial service at St. Paul’s Anglican Church in Fort William. Accompanied by the Fort William Pipe Band, members of both the Fort William and Port Arthur Canadian Legions joined with the Ladies Auxiliary and marched from Memorial Hall to St. Paul’s.

In August, many of the pilgrims returned home. The Fort William Daily Times Journal and the Port Arthur News Chronicle published interviews with some of the returned ex-servicement, who described their experience of revisiting the battlefields in Europe and having been a part of the Canadian National Vimy Memorial ceremony. 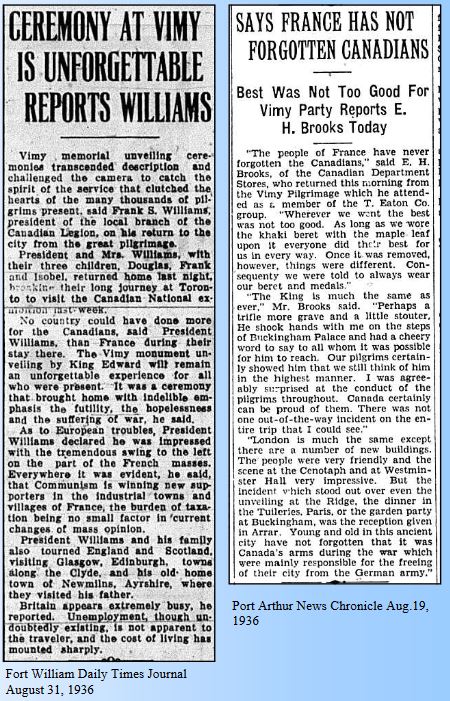