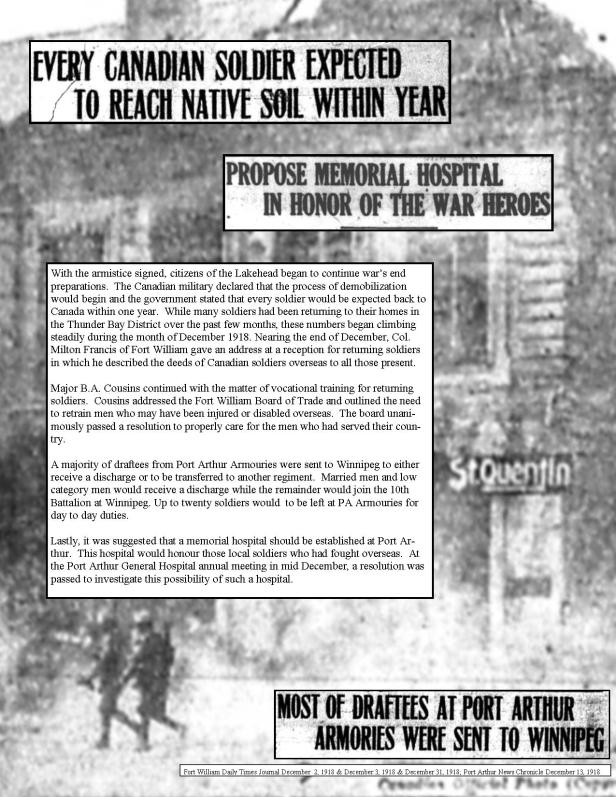 The Port Arthur council received correspondence from F.H. Keefer regarding the proposed military cemetery in the city that was mentioned in November.

Also continuing from November was discussion of the Atikokan Blast Furnace.  The city received correspondence from the Secretary of the Board of Trade that was referred to the Mayor and the Chairman of the Finance Committee.

The President of the American Public Health Association sent a letter to the Fort William Council urging that a delegate be sent from the City to the Convention in Chicago on December 9th to 12th. Dr. E.B. Oliver was sent to represent the City. A main topic of discussion was the Spanish Influenza.

In November, Port Arthur City Council had made resolutions of congratulations to send off to the leaders of the Allied Forces on the armistice.  Here they have received their first Thank You letter back from one of the recipients, Admiral David Beatty who was Admiral of the Fleet.

The City of Port Arthur received a letter thanking them for the “kindness shown French Marines while in this City.”  The French Marines had arrived to outfit the minesweepers being built at Can Car with munitions and sail them back to France.  The French Marines had arrived in September and left as the ships were completed.  Some stayed through to November to sail the last of the minesweepers over to France, among them the ill-fated Inkerman and Cerisoles which disappeared in a storm on Lake Superior on their maiden voyage, November 24, 1918.  Unfortunately, while in Port Arthur, one of the French Marines, Lieut. Edmond Jean Marie Raoult, was a victim of the influenza epidemic.  Port Arthur City Council had sent a wreath to his funeral and many councillors had attended.  Now they are discussing whether or not they would erect a monument in his honour.

The Thunder Bay Production and Conservation Association wrote to the Port Arthur City Council to inform them that they intended to write a book “dealing with the personnel and achievements of local Battalions with other items of local interest regarding our local men who took part in the Great War 1914-1918.”  The City council approves of this intiative.

With the end of the war, wartime industries would also be ending.  Her Port Arthur City council received a letter from the Employment Registrar about the “employment of staffs of men and women working for the Imperial Ministry of Munitions.” Different employment would have to be found for them at the same time as soldiers were returning also looking for work.

Port Arthur City Council also received a letter from the Board of Trade who were campaigning for November 11th to be declared a National Holiday.

The Port Arthur City Council passes a resolution to ask the Province to discontinue the War Tax at the end of 1918. The original purpose of the War Tax that had been levied by the Government of Ontario was to shore up the Province’s finances in case they had to contribute to the war effort in a significant way.  In actuality, the revenues of the Province increased during the war.  Due to this added pressure on the taxpayers of Port Arthur, and the war itself, “a great many of the essential works of the Corporation have had to be deferred, and the standard of service has suffered.”  They argue that since the war is over and the Province is doing well financially, the tax should be abolished.

Now that the war was over, it was time to focus on the homefront again.  Here the Board of Trade asks for representatives from Port Arthur city council to sit on a Joint Committee to “consider problems in connection with re-construction after the War.”

The Board of Trade wrote to Port Arthur City Council to thank them for new office space and for their help with a publicity campaign.  They also wrote to send a resolution to Council that they were suggesting one mill rate of the 1919 Tax Rate go towards the Soldiers’ Aid Commission.  The Council decided to defer this decision to the 1919 Council.

Port Arthur City Council receives another Thank You letter, this time from the Prime Minister of England, David Lloyd George.

The Fort William City Council receives a letter from the Toronto City Clerk with a petition to ask the Provincial Government to discontinue the Provincial War Tax.  Council endorses the petition and adds that they will also send a request to the Provincial Legislature and their local member of provincial parliament, Mr. C. W. Jarvis.

In October, we saw that food prices in Fort William were being investigated by the Dominion Government.  Here the Canada Food Board sends another letter about the price of meat in Fort William.

Fort William City Council receives a letter from Port Arthur City Council that they think it is too late in the year to “put a plebiscite to the people on the question of the union  of the two cities.”

Fort William City Council receives a letter from the Great War Veterans Association asking that they pass a motion that they have no problem with the Provincial Government allowing Sunday concerts to raise funds for the dependents of veterans as long as the concerts did not conflict with Church services. 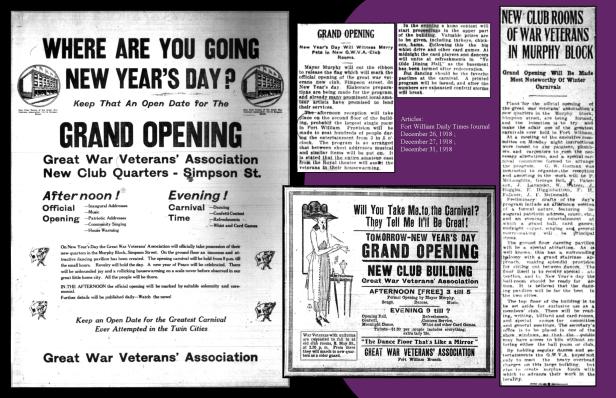